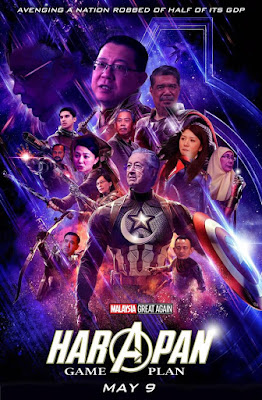 So a year has come and gone since the miracle happened that gave birth to the New Malaysia. I know there are a lot of skeptics and critics who say that Pakatan Harapan has been a letdown. Just the other day, a former journalist turned successful businessman said to me: "From one ex-journalist to another, what's your honest view of Pakatan Harapan so far?

This is what I told him: Pakatan might not have fulfilled some of its promises and the pace of reforms may have been much slower than expected but on the whole, this new government is a million times better than the previous one.

That ex-journalist agreed with me. I suspect there are many who feel exactly the same way. Yes, Pakatan has been a letdown in some ways but it's still way, way, way better than the alternative. Nobody wants to go back to the BN era.

If a voter is out of town (for university or for work), he or she might not bother to return home to vote because win or lose, it won't cause a change in government. In other words, the by-election is deemed to be rather inconsequential.

In contrast, if this were a general election, that same voter might think: "If I don't vote, I might be contributing to the defeat of Pakatan Harapan (either at state or federal level)". So that person makes a point to return to vote because the last thing he or she wants is a return to BN rule.

So, BN might have won three by-elections in a row. It's no indication that it will do any better in GE15 than it did in GE14. In fact, I believe it will do far, far worse in GE15 (but that's a topic for a future blog posting).

The pace of reforms has been slow but you have to understand Dr M is not by nature a reformist. At the very most he is a grudging reformist who has agreed to some reforms because of the insistence of his coalition partners. If he had his druthers, he would prefer to retain all the draconian laws like Sedition Act, Official Secrets Act and so on. Heck, there's probably a part of him who deep inside would like it if the ISA could be reinstated.

You are not going to see a whole lot of reforms during his tenure, which is already one year in on a two year stint. For real reform that will satisfy civil society, we really have to wait until Anwar comes to power. He is more likely to push through such reforms.

What you will get from Dr M are two things. Firstly, a push-back against royal political activism. The royals should be above politics although that's not always the case. Dr M will ensure that under our system of constitutional monarchy, it is the elected politicians who wield political power. Ours is not an absolute monarchy. Under a constitutional monarchy, it is the party that wins which gets to decide who becomes the prime minister and the menteri besar.

Secondly, prosecution of corruption, especially for 1MDB-related crimes. There will be no back-peddling or going soft on people who robbed the country of billions of ringgit. There will be no amnesty for these people. Dr M will make sure everyone responsible be brought to justice.

If all Dr M does is accomplish these two things during the one year he has left before handing the keys over to Anwar, our nation would owe him a debt of gratitude. What kind of prime minister would Anwar be? Of course we can't say for sure but he's not exactly a man of mystery. There are certain things we can expect.

For example, the pace of reforms when it comes to civil liberties would probably pick up considerably. I would be surprised if under and Anwar administration all the repressive laws are not thrown out. I expect them to be abolished before GE15.


Anwar has also been more consistent than Dr M when it comes to multi-racialism. Dr M's party is the only one in the coalition that is race-based. PKR has been multi-racial (thought predominantly Malay) since the start.

What's not clear is how Anwar would deal with the royals. Right now he seems to be the good cop to Dr M's bad cop. But if one looks back at history, back when Dr M first battled the royals during his first stint at PM, Anwar was his staunchest supporter and was strident in pushing back against royals. Will he be as strong as Dr M in this area when he is PM? One would think he would insist on the political party in power having the right to determine who is to become the menteri besar and so on, just like Dr M. But it's hard to say because of late he is seen to be softer than Dr M on this issue. Then again, his role may be that of the good cop for now. So we shall see what happens when Dr M leaves the political scene.

How about clamping down on corruption? There is no question Anwar will come down hard against corruption. He is committed to that. If anything, he will want his administration to be seen to be even cleaner than the current one (which is already a whole lot cleaner than the previous one). But will he be as aggressive when it comes to the 1MDB case? Or will he be softer on that? Again, that is hard to say but perhaps the main culprits behind the 1MDB scandal will be behind bars by the time he takes over.

Although we have not seen sweeping changes when it comes to repressive laws etc, to me the outlook looks good. I, for one, am damn glad that BN is no longer the government. I still pinch myself every now and then to make sure this is not a dream. Yes, we are free from that corrupt regime. Happy 1st birthday, New Malaysia!
Posted by Oon Yeoh at 5:54 PM