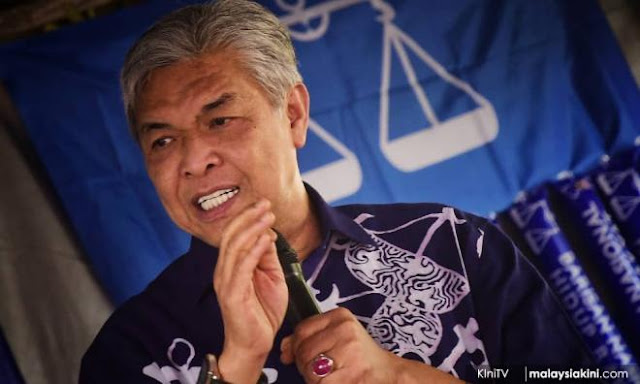 So there's a rumor going around about the prospect of a Pakatan Nasional, involving Bersatu, UMNO and PAS. Is there any truth to it? Probably not but for sure all three parties that are supposedly involved love the fact that these rumors exist, and all for the same Machiavellian reason. They like keeping the other parties around them anxious and uncertain.

For sure Dr M loves this. He's been doing for some time now. He loves keeping his Pakatan Harapan allies anxious and uncertain about everything. Is he going to ever let Anwar take over? Who knows. Is he secretly negotiating with PAS? Who knows. How about UMNO? Again, who knows. And what exactly does he talk about when he meets leaders from the opposition? Who knows.

Might he actually break up Pakatan Harapan? If he did that would be a classic case of cutting his nose to spite his face. But Dr M is unpredictable enough that he has his colleagues in Pakatan Harapan fearful that if push comes to shove, he might actually do that.

Nobody else would do that. Guan Eng and Kit Siang would never break up Pakatan Harapan just because they are unhappy about some things. Anwar would never do that. Neither would Mat Sabu. But Dr M... you never know about that wily old man! (At least that's what he wants his colleagues in Pakatan Harapan to think, and so far it's working).

If one looks at it objectively, it's hard to imagine Dr M seriously contemplating an alliance with UMNO and PAS, even though there's nothing he would love more than to Bersatu be the new UMNO -- the dominant Malay party that other component parties have to kowtow to. That's the political model he's known all his life and it's the model he's convinced is the best way to govern Malaysia.

He never believed in the all-component-parties-are-equal ethos of Pakatan Harapan. He just acquiesced to this because he desperately wanted to get rid of Najib. He much prefers the BN model. But Dr M surely must know those days of a super dominant Malay party lording over everyone else are over.

He's no fool. He knows that we live in a different era now and the electorate will never go back to the old BN model.

Before you utter: "But BN has been winning all those by-elections". Yes, it has because by-elections have little to no national consequences and the electorate is sophisticated enough to know that. That is why the voters use by-elections to send a message to the federal government that they are disappointed and fed up with the slow pace of reforms and the non-fulfillment of promises.

Those people who voted for the opposition to send Pakatan Harapan a clear message would not do the same thing if the federal government is in danger of falling back into the hands of BN. No way would they ever vote for BN in such a scenario.

Dr M must know that he would alienated all the people who had supported Pakatan Harapan if his party were to have anything to do with UMNO or PAS. And if you were to add all of the MPs these three parties have, it would still not be enough to form the federal government. Unless his calculations are that enough people from PKR and Amanah who would jump ship and join his party if he were to do something like this.

But even so, it would still be hard for this so-called Pakatan Nasional to get enough seats to control the parliament. Don't forget, if such an opportunistic alliance were to come to pass, there would also be people from all three parties who would leave the party. There are bound to be some people from UMNO and PAS who are opposed to any form of cooperation with Bersatu. There will also be some people from Bersatu who would quit that party rather than join hands with UMNO and PAS.

In other words, I can't imagine a scenario where a Pakatan Nasional alliance could get enough seats to form the federal government. The math just doesn't add up!

So, what is Dr M's ultimate game plan? What does he hope to achieve beyond making everyone anxious and afraid of him? That's a big imponderable. But with each passing day, it's looking more and more like he doesn't want to pass the baton onto Anwar.

He can say a million times that he plans to hand over the PM-ship to Anwar but nobody will believe him unless and until he sets the date -- which so far, he refuses to do.

This is classic Mahathirism. Keep your opponents and allies alike guessing, worried and fearful. We won't see less of this in the coming months. We'll see more of it.