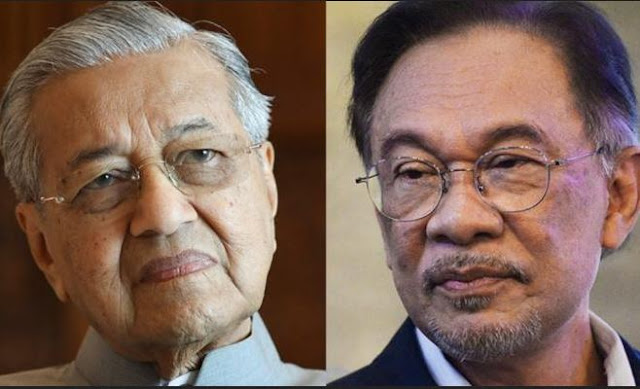 Dr M's mistake is complacency. At one point, right after the Sheraton Move had happened, he had all of Harapan and all of Bersatu and all of Muafakat supporting him to become PM.

Harapan wanted him to remain as their leader and help them win back the majority in Parliament. Bersatu, aiming to team up with Muafakat (BN + PAS) wanted him to join their side and take control of Parliament.

Guess what. Everyone told him to take a hike. Harapan rejected this and so did Bersatu/Muafakat, who went on to form Perikatan.

Anwar's mistake is he likes to play political poker. At one point, he probably did have enough MPs backing him to take majority control of Parliament. At least on paper. Meaning if he counted all of Harapan, and he counted all the UMNO guys who were willing to support him, and he counted some GPS guys who might have been willing to cross over, and if he counted Warisan as eventually joining forces with him, yes he probably did have more than 112. Maybe he had something in the 120 range.

But he wanted more in order to show that he had a strong majority. So what did he do? He announced in advanced what he was going to do. He did that to induce fear and therefore encourage even more crossovers. Those sitting on the fence would think: "Oh, damn... Anwar's going to be PM... I'd better hop over and join his side".

There are two problems with this strategy. Firstly, each party that was supposed to be supporting him was kept in the dark as to who else they were supposed to be partnering with. Then, you have DAP saying no way would they work with UMNO. You also had UMNO saying no way would they work with DAP. So, on paper yes, he had the numbers but in practical terms, he didn't because these two major parties cannot work together.

The other problem is that by openly declaring his gambit for the world to see, it gives him enemies the chance and the time to counter his moves. And counter it, they did.

DAP and Amanah's mistake was they decided the best way to deal with a manifesto-reneging Dr M was to appease him. To walk on eggshells and to bend over backwards to make sure he wasn't unhappy, lest he pull the trigger and blow up Harapan.

So, instead of putting their foot down and reminding Dr M that he needs them as much as they need him, they acted as if everything hinged on keeping Dr M happy. But if you give someone like Dr M an inch, he will want a mile. And however compliant they were, it was never enough.

The problem with appeasement of bad behaviour is that it doesn't encourage good behaviour, it encourages even more bad behaviour. The more they kowtowed to Dr M, the more recalcitrant he became.

Muhyiddin's mistake was that he somehow believed that partnering up with Bersatu's rivals, PAS and UMNO, to form a new government with a razor-thin majority in Parliament, is a sustainable thing.

Perhaps he saw how Dr M could cow the other Harapan partners despite the fact that Bersatu had very small numbers, and was inspired to try to do the same. But he, of all people, should know UMNO's character. UMNO will never stand for a smaller party taking charge. And so you have all these rumblings within UMNO, constantly threatening to leave him for Anwar.

UMNO's mistake is in thinking if there are snap polls they will win the majority. The reality is that not only is PAS gunning for the same seats as UMNO, so is Bersatu. And then they've also got Harapan to contend with in Malay seats.

Let's be clear. There is no way UMNO, PAS and Bersatu can come to terms on seat allocation. Each party will want the lion's share of seats and the others won't give way. So, there will be a deadlock, resulting in either a three or four-way contest. Or if the top guns miraculously manage to come up with a compromise candidate from one party, the other party leaders will sabotage the campaign.

Either way, it will not be easy for UMNO to win enough seats to control the government. They are dreaming if they think GE15 will be a walk in the park for them. If anything, they will lose even more seats due to the conflicts with Bersatu and PAS for seat allocations and the ensuing problems that result from that.

So, what's the best solution? Just wait for GE15 to happen. If Anwar wants to become PM, he has to make sure that PKR + DAP + Amanah win enough seats to form a government without having to make deals with or relying on any other party (which could hold it to ransom).

Dr M has already stated clearly that his Pejuang party aims to become the Kingmaker. Any other party outside of the Harapan tent will also want to be a Kingmaker. So, he needs to come up with a strategy for PKR, DAP and Amanah to close ranks and prepare for a win in GE15 without the help of others.